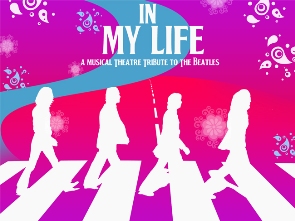 On Feb. 18 we are doing a concert show under the band’s name, Abbey Road, in Visalia. Only 400 seats available!

Abbey Road – A Tribute to the Beatles has honed their show to become one of the most musically and visually satisfying Beatle tribute acts in the world. Abbey Road recreates the magic, music, wit and charm of the Beatles, including the Fab Four’s cheeky personalities, familiar onstage banter and patter between songs. Three costume changes cover the full range of the Beatle experience and beyond, with authentic early black Beatle suits, Sgt. Pepper’s regalia and Abbey Road attire. Hear the piccolo trumpet solo on Penny Lane and the full orchestration of A Day in the Life. Relive the emotional intensity of Paul’s moving Yesterday solo, as well as the high energy of stadium songs like Twist and Shout and other Beatle hits.